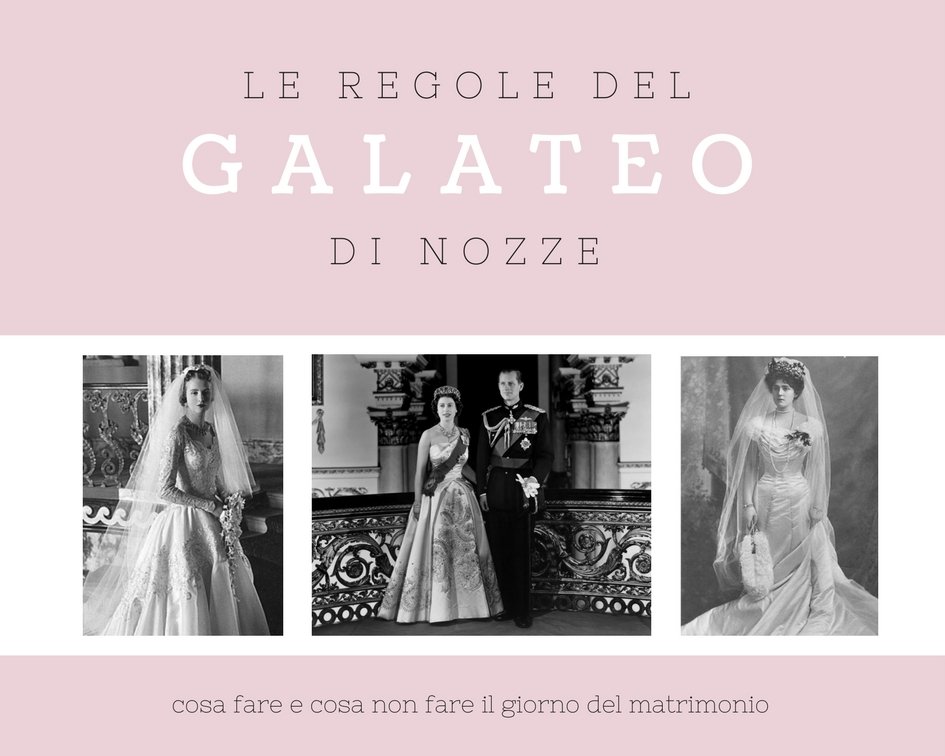 There are many spouses who ask themselves the question when they start the preparations for their best day: are we forced to observe the rules of etiquette or can we safely ignore them? When this question is posed to me, my thoughts immediately turn to the image of white and black: no one forces the spouses to adhere to etiquette, but once it is decided to respect written rules (not by me ed!) It must be done until the end. On the other hand, as already mentioned above, there is no obligation and therefore full freedom to do as our heart inspires us. Wearing a tuxedo in the middle of the day (the etiquette does not provide for the groom to wear it NEVER! Ed) or choosing to wear a tight or half tight during the afternoon / evening ceremony, honestly makes it a bit of a pantomime. It can be worn during ceremonies by 6 pm in Italy and by 4:30 pm in the United Kingdom and in fact is called a “morning dress”. If it is chosen by the groom it becomes an obligation also for the witnesses and the fathers of the spouses. The Frac instead should be used only for evening ceremonies. Often and gladly I notice that when the bride arrives at the altar, the groom reveals her and smacks a light kiss on her forehead, this gesture so cute and sweet, without a doubt, makes it clear that the spouses do not know the real meaning of the gesture. According to etiquette, it is the father of the bride who reveals her, kisses her and puts her in the hands of her future husband. The “delivery” to his new life. Another topic that triggers absurd diatribes: the guests’ outfit, including mothers of the spouses. Now starting from the absolute assumption that no one should ever even think about dressing up too conspicuously at risk of overshadowing the bride, here are the rules set by the etiquette of marriage. It seems obvious to say that white should be avoided, alas, on some occasions I have seen guests who had worn it. If the bride has not chosen white for her dress, this should also be avoided. The absolute prohibition of dressing in black, a color reserved for funerals and elegant events, has recently come to a halt: someone (I don’t know who!) Has established that worn together with white or colored accessories is possible. I remain faithful to tradition: you have many opportunities to use black, you should not use it at weddings.

My dear readers, red is also banned because it is considered too daring, the same goes for the viola, which in addition to being quite striking is linked to Christian Lent. The galaeto includes the use of pastel shades. Obviously all these rules if they are valid for the guests also apply to the mothers of the spouses. Yes to dresses in sober colors: cobalt blue, navy blue, sugar paper, light blue and light blue. Absolutely avoid clothes that are too short, too flashy, full of sequins and in general too elaborate: you are not the protagonists of the event! Yes in small floral patterns but only during daytime events. Speech bags, ca va sans dire, yes a clutch and small bags, no for shoppers or bags with a handle. The hat is only used by the mother of the bride who authorizes everyone to wear it. I recommend the beautiful books on etiquette, many often say “I do not care, I dress as I like at weddings!” Very well, free to do so but always remember that the etiquette is nothing but: The set of rules for behave conveniently and DIGNITALLY in social relations! Because often only a pinch of the dear, old and now outdated fashion would be enough GOODWAY!

FILL THE FORM AND…

Get in touch with Michela to receive
all information on services

FILL THE FORM AND…

get the document required!

Browse the site and discover
the services dedicated to you